To share your memory on the wall of Robert Hudson, sign in using one of the following options:

Born November 11, 1936 in Dover,Delaware to Hannah and Robert Hudson Sr. and shortly there after they moved to Emporia,Virginia where Bob called home.

Educated at Greenville County high school where he came back later to teach and coach. He also attended Randolph Macon Military Academy, NC State University, and the University of Indiana receiving his Masters in Recreation and Park Administration, Health, Physical Education and minor in Mathematics. Bob taught science and math as well as coached basketball, football and baseball. His student and student athletes remember him as a leader who inspired them to do their best saying ... “he was a caring coach”. Bob proudly served his country as a Marine, before starting his career as a teacher and coach. Even after retiring from teaching in Hanover County he moved to Newport News, VA, to coach baseball at Hampton Roads Academy for many years. He was also a member of York Presbyterian Church and the National Major League Baseball Club.

His memory will be cherished and kept alive by his loving partner Frances MacDonald; sister Cora Lee Smith and husband Curtis; 3 children Sara Forbes, Nancy Clarke and husband Pete; and his son Rob Hudson; 4 stepchildren Marie Clary, and husband Don; Teresa Cullom and husband John, William “Tommy” Foster and wife Karen, and Leah Burns; also 12 grandchildren and eight great grandchildren as well as nieces, nephews and friends. He was preceded in death by his parents and brother Larry Hudson.

To send flowers to the family or plant a tree in memory of Robert Prince Hudson Jr., please visit our Heartfelt Sympathies Store.

Posted Aug 08, 2020 at 01:29pm
Bob and I had a unique but a wonderful relationship, he always had a way to make me happy, and he never met a stranger, he would talk to someone and they parted as friends. Bob taught me that in this life there are only challenges not problems and together we could overcome them all and there's no crying in Baseball, we both had passion for Baseball that's how it all started. I will miss you and always love you. You were my "Baseball Man"
Comment Share
Share via:
AM 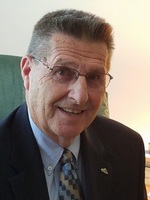