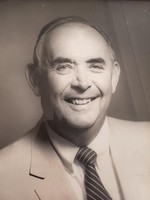 Rene L. Allard passed away peacefully on Friday, September 13th in Virginia Beach VA while son John and daughter in law Marylee stood by his bedside. Rene was just 5 days away from his 93rd birthday. Rene was always a positive, hardworking, loving, caring and religious person. His family, friends and Catholic religion meant everything to him. If he considered you a friend it was for life. He never complained and made the best of the cards life dealt him. When he found out there was anything that could be done about his cancer he responded, in typical fashion “Well it is what it is”
He is survived by his three sons John of Virginia Beach, VA (wife Marylee), James of Davisburg MI (partner Sueellyn) and Tim of Charlottesville VA (wife Suzanne). A brother Bob (wife Helen), a sister in law Anabel, 7 grandchildren, 8 great grandchildren many nieces, nephews, great nieces and great nephews.
He was preceded in death by his wife Virginia of 60 years; his father Rene Allard, his mother Marge Conley, and Brother Fred.
Rene was born in Detroit Michigan and as a young man served in the Navy in World War II. After being honorably discharged from the Navy, he was employed by Bordens Creamery as a commercial milkman delivering to many grocery and convenience stores. It is here that he met Virginia Trombley and they were married in August of 1950. They lived in Detroit before moving to Royal Oak Michigan in 1960.
Shortly after marriage Rene became a residential milkman for over 2 decades, a very successful Realtor in the Oakland County MI area and became President of the South Oakland Board of Realtors and a partner in a the Real Estate firm of Roe Roberson Realty.
Rene and Virginia retired to Virginia Beach in December of 1989. Not one to stay idle in retirement he worked many years at Costco as a food demonstrator and later prepared tax returns for Liberty Tax Service.
After Virginia’s death his Red Mill Farms home became too large and he moved to Atlantic Shores Retirement Community. He quickly made many friends and life revolved around the dinner table in the main dining room. As the years passed and his health declined he relocated to the assisted living complex at Harmony at Independence.
The family would like to thank the wonderful, caring staff at the Harmony at Independence and those of Interim Hospice of Virginia Beach whose expertise and care will never be forgotten and greatly appreciated.
A memorial Mass for Rene will be held at St. John the Apostle Catholic Church on Sandbridge Road on Friday, Oct. 11th at 10:00 AM.
In lieu of flowers a donation to St. John the Apostle Catholic Church Building fund would greatly appreciated.