To share your memory on the wall of Edward Gingras, sign in using one of the following options:


Please share a memory with the family via the "Condolences and Tributes" tab.
Read Less

To send flowers to the family or plant a tree in memory of Edward Gingras, please visit our Heartfelt Sympathies Store.

There are no events scheduled. You can still show your support by sending flowers directly to the family, or planting a memorial tree in memory of Edward Gingras.
Visit the Heartfelt Sympathies Store

We encourage you to share your most beloved memories of Edward here, so that the family and other loved ones can always see it. You can upload cherished photographs, or share your favorite stories, and can even comment on those shared by others.

Posted May 15, 2020 at 08:55am
Ed will be fondly remembered and sorely missed at the Little Creek Retired Activities Office.
On behalf of the many hundreds of folks he helped there over the years, Godspeed.
John Evans, RAO volunteer
Comment Share
Share via:
CZ

Posted May 13, 2020 at 12:00pm
I remember Ed as a wonderful friend and as a big brother I never had. Visiting Donna & Ed, no matter how many years past, was like living down the street from them. I vividly remember a visit to Macy's in New York City with Ed as my guide. He drove around the streets as if he knew them all or had been a taxi driver in another life. It was then that he told me he had driven them many times chauffering people around. My best memories of them both are visits to Mahwah, Barnegat, and Mystic.
May Ed rest in peace, love to Donna & family.
Cathy Zajewski
Comment Share
Share via: 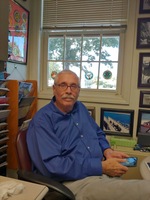