To share your memory on the wall of Harles Shiflett, sign in using one of the following options:

Harles graduated from Deep Creek High School and from Lee's Business College in Accounting. I'm not sure when he started going by Charles or Charlie. But it was his legal stage name. So, depending on who he was talking to or who was talking about him, you may have heard both names in the same conversation.

He raised a family that ultimately went their separates ways after a divorce. But there is more to family than blood and if there is something Harles/Charlie has is a large family and an extended family of friends. Where the line is drawn only he could truly say, and I doubt he would call any of them any less than real family. I will name some but do not fret if I somehow left you out as like all movie trailers, brevity is required... Bob, Judy, Agnes, Beverly, Suzanne, Gerald, Mary, Bobby, Lyddy, and Cousin (But more like another Brother!) Doug.

He did have a partner in crime and a true partner she is. The next cast member is of course Claudette and her entourage of men... Kenny, Keith, and Kyle. Charlie and Claudette found each other after Claudette started working at his office. They have been together since 1994. His family extended, Sunday breakfast at Claudette's got a wider audience, and regular card games of "Bullshit" took place. They even had some misadventures spanning the continent, from Big Bear to Viva Las Vegas, the French Quarter to the white sands of Ft. Walton Beach.

In case you have not noticed, he loved movies... at the movies, on VHS, on DVD, on cable, on satellite dish or his newest addiction Netflix. He would often still argue that Betamax was better than VHS as it was smaller and produced a better picture. Of course, he was right on both points. He combined this love with his love of computers. When we had to sell his home, there were thousands of DVDs, hundreds of VHS tapes, and over 6 terabytes (6000+ gigabytes!) worth of movies he had recorded on his computer.

Harles was a die-hard Green Bay Packer fan except when they forced Brett Favre out. So, they were temporarily excomunicado. But my earliest real memory of my Dad was when he was watching Green Bay's quarterback Bart Starr throw an interception for a defensive touchdown. I don't clearly remember the words he said in that moment but the karate chop of the coffee table in half was a thing of beauty!

Like George Bailey in It's a Wonderful Life, Harles was a giver. He enjoyed giving gifts and never more so than Christmas in Carolina! He would attend a Xmas party for the more southern branch of the family and bring a trunk load of gifts with him. Special Acknowledgement to Doug for making it happen again for Harles one last time in 2019! He really did enjoy it.

Life may be a box of chocolates but if you were a customer of Charlie's, it was more common to get Girl Scout Cookies. It was a Cannonball Run for Girl Scout parents to get to Charlie first as he would buy 3 to 4 Thousand boxes. "Would you like some Somoas with that refund?"

My Dad was a great friend, a loyal confidant, mentor, Best Man and actually a pretty good first coach

These are some of the scenes of Charlie/Harles' life that I chose to point out. Your memories may be wildly different than mine and that is a good thing. Think of him, what memories he made with you, and why they are important to you. Celebrate his life and the role he played in yours. Continue to write your own movie but honor him a little by stealing some of his thunder... imitation is the greatest form of flattery!

But if you see Charlie with his dog Brandy, you are seeing their ghosts! But don't run as this is Director’s Cut and Charlie is just trying to get to see the Bonus Footage. Sit a spell, have some popcorn with him, and enjoy that extra little bit of time with Charlie as he laughs with you.
Read Less

To send flowers to the family or plant a tree in memory of Harles G Shiflett, please visit our Heartfelt Sympathies Store.

We encourage you to share your most beloved memories of Harles here, so that the family and other loved ones can always see it. You can upload cherished photographs, or share your favorite stories, and can even comment on those shared by others. 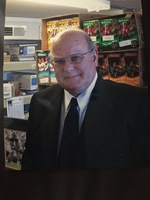