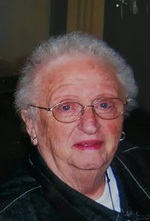 Mrs. Farrell was born Sunday, April 3rd, 1932 to the late Stephen and Margaret Dessaint in Rhode Island. She worked for Craven Regional Medical Center, retiring after 22 years of dedicated service. Florence was a committed wife and mother, she was funny in a way only she could be. She was a gifted crocheter, an avid bingo player, and loved audiobooks. Although she enjoyed those things, nothing compared to the love and dedication to her family. Mrs. Farrell will always be remembered as a loving mother, grandmother, great grandmother and friend. She will be deeply missed.

A graveside service will be held at 2:00 pm, Thursday, November 5th, 2020 at St. Paul's Catholic Church Cemetery in New Bern, NC. In lieu of flowers, memorial donations may be made to the Food Bank of Southeastern Virginia and the Eastern Shore.

Please share a memory with the family via the "Condolences and Tributes" tab.