To share your memory on the wall of Brandon Wolfe, sign in using one of the following options:

Print
On March 31, 2021 Brandon Michael Wolfe, beloved son and brother, passed away at the age of 30.

He was born in Kirkland, Washington on March 15, 1991 and spent a beautiful childhood in Monroe and Snohomish. Eventually he and his family c... Read More
On March 31, 2021 Brandon Michael Wolfe, beloved son and brother, passed away at the age of 30.

He was born in Kirkland, Washington on March 15, 1991 and spent a beautiful childhood in Monroe and Snohomish. Eventually he and his family called Orofino, Idaho home.

He graduated Orofino High School in the Class of 2010 and worked at the Clearwater Potlatch Timber Protection Association all four years of high school. After graduation, Brandon enlisted in the US Navy. He initially signed up as an underwater welder, inspired by shop class, but testing revealed he was cut out for intelligence. He served 8 years in the United States Navy, earning the rank of Intelligence Specialist Second Class and also earned three enlisted warfare devices, or subject matter expertise pins, including Information Warfare, Surface Warfare, and Air Warfare (IW/SW/AW). His service included two years in Fallon, NV, two years forward deployed to Yokosuka, Japan aboard the USS Blue Ridge during which time he earned the honor of Shellback, and three years at Commander Carrier Strike Group Four in Norfolk, VA before he was honorably discharged in 2019.

After leaving the Navy to pursue bigger and better things more befitting his potential, he settled in Norfolk, Virginia where he went back to school and began coursework to earn a degree in Computer Engineering. Not being satisfied with this, he also accepted an internship at Jefferson Laboratories, something he was immensely proud of. His passion for science was appreciated by all, and quantum computing was his love. He spent innumerable hours lovingly engaging in enthralling conversations with anyone and everyone who would listen about space, reality, and all the possibilities that his substantial, open mind could conjure.

Musically inclined, he would play guitar for hours and write songs for those he loved. His adventurous side lacked for nothing. His first motorcycle came at age 4 and the interest continued into adulthood. He also loved snowmobiling, four-wheeling, climbing ice mountains, participating in Tough Mudders, and riding horses with no fear of being bucked off. His gift of kindness was generous, and there was no one he would not help. His light shined brightly, and his presence made us all better for knowing him.

He is survived by his Mother Kelli Rosellini, Sister Myrissa Wolfe, and Grandmother LaDonna Rosellini. His Aunts, Uncles and Cousins were numerous. His chosen extended family grew wherever he went, and his friends numbered like the stars, which he loved so well. Goodnight sweet prince.

Memorial services will be held on Saturday, April 17th at 3:00 pm at the Big Eddy Marina Lodge in Orofino, Idaho.

To send flowers to the family or plant a tree in memory of Brandon Michael Wolfe, please visit our Heartfelt Sympathies Store.

There are no events scheduled. You can still show your support by sending flowers directly to the family, or planting a memorial tree in memory of Brandon Michael Wolfe.
Visit the Heartfelt Sympathies Store

We encourage you to share your most beloved memories of Brandon here, so that the family and other loved ones can always see it. You can upload cherished photographs, or share your favorite stories, and can even comment on those shared by others. 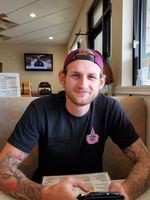